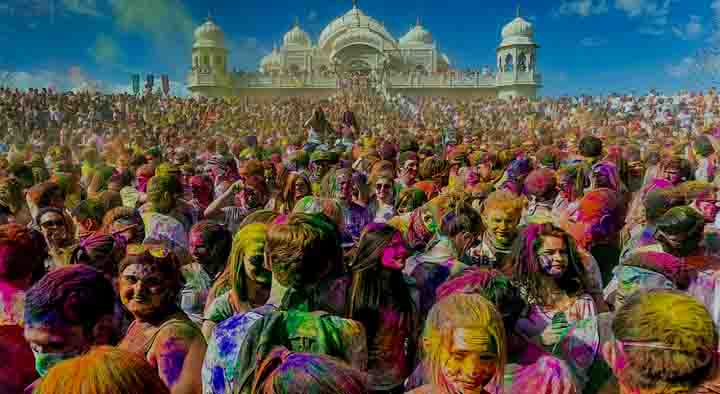 What is the Holi Festival of Colors? The festival of Holi ( festival of colors) is a fascinating cultural and religious celebration that involves much more than just throwing colorful dyes in the air.

In this article, you will learn some facts and information about the common Holi festival and get a glimpse of the rich religious traditions behind its celebration.

We will also tell you about some of the voluntary organizations that organize events in India so that you get a chance to enjoy the Holi festival.

Holi is the favorite of Hindu holidays. Holi, sometimes called the festival of colors, is an ancient Hindu festival that has been celebrated in India for more than two millennia.

It is mentioned in several major Hindu scriptures, including the Vedas and Puranas. Holi is the joyous celebration of the coming spring. Since Hinduism follows the lunar calendar, the holiday may fall in February or March.

It takes place on a full moon night and continues until the next day. However, in some parts of India, the holiday spirit can last for more than two weeks.

What is Holi Festival?

Holi is a Hindu festival celebrated every year all over India. It celebrates the arrival of spring and marks the victory of good over evil.

Although it is a Hindu festival, most Indians celebrate Holi. The festival of colors is such a lively and festive occasion that how could you not want to participate?

On the day of Holi in India, regardless of your race, religion, or creed, on this day, the people of India gather when they throw colored powder and water through the air.

When everyone is covered in rainbow colors, their skin, hair, and clothes look alike, creating a sense of inclusion.

Where is Holi celebrated?

We have celebrated Holi in Mathura but Holi is celebrated all over India. North India celebrates Holi with more enthusiasm, but it is gaining momentum in other parts of the country and around the world.

Mathura is the number one place to celebrate Holi because it is the birthplace of the Hindu god Lord Krishna.

Jaipur – Elephant festival is celebrated here on the eve of Holi

Udaipur is the most beautiful city in India and the streets come alive during festivals.

Goa – Not as much celebrated in South India as in the North, but since Goa is a popular tourist destination, Holi is celebrated.

Mumbai is another great place to celebrate the Holi pot competition to be the king of Holi.

Agra is also celebrated in Uttar Pradesh, so if you find yourself exploring India’s most famous attraction, the Taj Mahal, you can join it.

West Bengal – Dol Jatra of West Bengal is celebrated on the day of Holi. It is just like Holi and the people of the festival also throw colorful water to celebrate Lord Krishna and Radha.

Traveling from Agra to Mathura is easy. Mathura is located just 50 km north of Agra, just two hours by train from Delhi, making it an ideal location.

But Holi is celebrated in all parts of India, so chances are you will be able to join the celebration wherever you are in the country.

Holi is celebrated mainly by Hindus. That said, the festival is a very inclusive one because unity is one of the main themes of the festival.

Therefore, although the festival of Holi is rooted in Hindu tradition, it is a celebration that takes place all over the world. It brings people together and invites them to overcome obstacles, to feel united in a large colorful group.

What is the story of the Holi festival?

It is said that the festival of Holi was originally a ceremony for married women to spread prosperity and happiness in their new families.

Since then, the festival has evolved to include much more. Now, a major focus of the Holi festival is the celebration of the victory of good over evil.

The victory of good over evil in Hinduism is rooted in the story of Hiranyakashipur. He was an ancient king who claimed to be immortal and wanted to be worshiped as a god.

His son Prahlad was deeply devoted to the worship of the Hindu god Vishnu, and Hiranyakashipu was furious that his son had worshiped him.

According to legend, Lord Vishnu appeared in the form of half lion and half male and killed Hiranyakashipu. So, good win evil.

Another story related to the Holi festival is about Radha and Krishna. As the eighth incarnation of the Hindu god Vishnu, Krishna is seen by many as the supreme deity.

It is said that Krishna’s skin was blue because according to mythology he drank the poisonous milk of a monster as a child.

Goddess Krishna fell in love with Radha, but feared that she would not love him because of her blue skin – but Radha allowed Krishna to paint their skin, making them a real couple. In Holi, festival participants dye each other’s skin in honor of Krishna and Radha.

Cleaning up after Holi was not a fun process. The sun was strong and a mixture of white and colored foam, water, and thick powder accumulated on our skin.

The mixture of colored powders and water stains our skin and hair and makes our skin look raw and we had to scrub until it finally looks closer to normal.

Didn’t go back to it as before. My hair was pink for weeks, and our legs? Okay, our feet have never been better since Holly.

For several days before the Holi festival, people collect wood to make a big bonfire on the eve of Holi, known as Holika Dahan.

Holi Dahan is held every year on the evening of the full moon in the Hindu calendar month of Falgun. (Aka the full moon in March and the night before Holi) Holika Dahan celebrates the death of the Hindu demon Holi and the victory of good over evil.

Hiranyakashipu told Holika to burn her son Prahlad alive. Due to his devotion to the Hindu god Lord Vishnu, he hated Prahlad and made several attempts to kill him. But Prahlad survived.

Since the gods gave Holika immunity from the fire, he tried to kill Prahlad by sitting in the fire with him in an attempt to burn Prahlad.

Instead, the gods punished Holika for misusing her power. Instead, he was burned to death, while Prahlad survived to rule as a wise king.

On the evening of the Holika Dahan festival, people gather to light a fire to celebrate the victory of good over evil.

The fire burns till late at night and from morning people dance and sing and celebrate. The whole of India is dependent on electricity.

On the day of Holi, we wandered the streets of Mathura indiscriminately because we did not know where to start. Crowds were gathering on the sidewalk, but we weren’t quite sure where the celebration center was.

Fortunately, we stumbled upon a small yard, where a man caught our attention. He asked us to join the festival inside. We never accept invitations. Everyone welcomes us with open arms and colors.

We all got together in the colors of Lord Krishna and joined the crowd. The Hindu deity, Lord Krishna, is depicted with blue skin, but the festival presents a rainbow of every color.

Holi is known as the festival of colors and the vibrant colors of Holi represent love. The “Holi chief of the temple” told us that Holi is a time for the people of India to eradicate superstition, religion, caste, and discrimination.

He even involved Dave playing drums at the head of the temple. The men liked to hold Dave’s hand high in the air as they danced and laughed in a circle.

Men and women did not hold hands in this festival; Instead, they only touch one penis. Children and adults alike were highly respected for throwing a handful of colored powder and water on top.

The women dance with me one by one, and the men take turns dancing with Dave. It was tiring but at once exhilarating!

As Westerners only at the temple, we were somewhat new, but the people of India were really welcoming and friendly. If you celebrate Holi in India, it will be the most memorable travel experience of your life!

Mathura where we have celebrated Holi, but wherever you are in India, it will be celebrated.

India is an amazingly religious and culturally rich country. From the Holi festival to the people to the animals, one has to have a lot of experience and make connections.

There is little time to learn about India and its rich heritage Plan your volunteer trip today. If you are lucky, you can also get an authentic experience of celebrating Holi.